Dungeons & Dragons at The Game Zone: The Story So Far – Part 1

Every other Thursday night we host an Advanced Dungeons & Dragons First Edition homebrew game night at The Game Zone in magical Hillsdale, NJ.  The event is free to play and open to players of all experience levels. 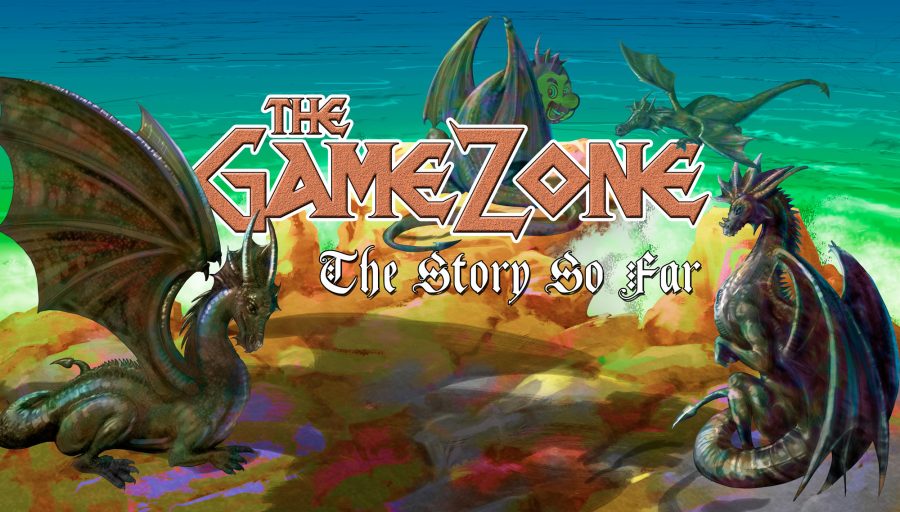 To keep you up to date with the quest of our brave and mighty players, we’ve decided to post updates as the adventure unfolds.

The party all hails from the nation of Astaria, bordered to the south by the ocean, to the north by the iron mountains, which house all sorts of nasty creatures … but also lots of ore and gems … to the west the plains leading to the friendly nation of Organa.  To the east is the land of Nazar, led and controlled by the eponymous ruler, Nazar.  He, or it, took control of the country over 200 years in the past but seems still to be sticking around.

Who, or what, Nazar may be is unknown and the entire country’s borders have been closed for over a century.  None in; and none out but some very limited trade. (For players, think North Korea with magic instead of nuclear weapons.)

There was war in the distant past, now more than 100 years ago, and a peace of sorts exists.  The nation of Astaria is led by Lord Chamberlain, a ruler of no real strength.

By the time of the adventure, June 1, 1089, Nazar – the land and the leader – are simply there.  Despite the proximity, there is little contact between the two nations … at least as far as the peon little adventurers are aware.

The part of Astaria in which the story begins in the southwestern corner of the country, bounded by the ocean, with a series of smallish fishing towns and villages.  The nearest large towns are Deal and Roses, with the city of Charm farther to the West.  There are farming villages farther inland.

THE STORY SO FAR:

A group of adventurers, each responding to an announcement at their various guild houses from the cities and largish towns surrounding, responded to the notice issued by the town of saltmarsh: Haunted mansion on the hill causing trouble. Please help! All treasure found may be kept!

Saltmarsh consists of a run-down inn, a wharf and several fishing boats, a town center, a blacksmith and several other commercial buildings.  The homes are scattered in and around the town.  The saltmarsh which gave the town its unfortunate name starts a mile south of the village and continues for a league.  The marsh is true wilderness, full of god knows what.

The mansion at the top of the bluffs above the town is visible for miles from the road.  On the way in, the group noticed lights at odd intervals from the higher level windows of the building.

The ocean is the main point of commerce, and on their way into town, the group saw the occasional small merchant caravan, carrying sewing needles, mirrors, cloth and the like to Saltmarsh and barrels of salted fish out of the town.

Before too long the fat mayor Nathan waddled in and the group.  Lights and sounds had been coming from the old mansion, last inhabited decades above by the old Lord Bartholew who disappeared … or died … or who knows what the idle rich do with their time.

After brief conversations with the Mayor and amongst themselves the party decided to take up the adventure and head out in the morning.  The group, which consisted of Monty the mage, Jerome the Gnome cleric and a bunch of fighters, one loopy paladin, an illusionist and the nameless monk headed out to test their mettle and make their fortune … or meet their demise.

The next morning, after a breakfast of watery oatmeal provided (at the Mayor’s insistence) for free by a grumpy innkeeper the party trudged up the hill towards the mansion.  The trip took a half mile up the winding cliff walk.  Although the town might be run down now, the walk itself revealed the harsh beauty of the area.

As they rounded the final corner the group saw the mansion itself, standing on a cliff 100′ above sea level and about 80′ from the cliff edge.  The garden is run down and the gates askew.

The group slowly walked around the mansion, taking in all the sights.  Eventually, the group cautiously entered the building and encountered what appeared to be an abandoned, rotting building.  Other than killing a giant spider who took up residence in an abandoned chimney in one of the rooms, the dwarf fighter falling through a loose floorboard and that same dwarf fighter foolishly putting on a moldering cloak and dying from the poisonous effects, little of interest is found in the building.

The party collectively felt awe at the death of the first member, and they stood around his corpse and said, “Aww.”  And then they carefully stripped his corpse of everything useful and moved on.

Soon thereafter they found someone tied up in one of the rooms and immediately concluded that he was a good guy.  They ‘rescued’ ol‘ Ned, took him outside and let him go.  No questioning, no nothing.

They then went through the rest of the building, discovered a few magic items, fought a nest of stirges almost to the death (theirs) and recovered a magic ring, and then had to retreat back to Saltmarsh to lick their wounds.

Back at the Inn the party – the new dwarf having magically appeared in their midst – was met by Nick the Druid who lived outside the town near the marsh.  Nick is the Druid assigned to Saltmarsh and the surrounding area.  He alerted the party to the possibility that – wait for it! – the mansion might not actually be haunted, and to keep an eye out for anything peculiar.

Back to the mansion they trudged and having secured the upstairs investigated the first-floor level and discovered, in the kitchen, a secret door leading down into some tunnels.  Ah hah!

They immediately tumbled down into the dark passageway and surprised a group of pirates playing poker and drinking rum. There was a momentary pause of mutual shock and then the battle was on!

The party quickly overcame the first few pirates but were confounded and confused by a clever illusionist pirate leader.  Some lucky (and clever) counters were put into place and all of a sudden they were the victors!

The pirates were searched – or, rather, their bodies were – and a map and a code were discovered, as was a black skull medallion on their leader, the illusionist.  More searching revealed a concealed door behind which the former master of the mansion was revealed, now a skeleton, sitting behind his desk, all sorts of alchemical creations on his desk.

Magic items and other treasure were discovered and taken and the maze of underground passages searched.  The caverns cleverly went all the way down to the ocean and in one of the final rooms the party found crates and stacks of weapons and armor, far more than a simple group of pirates could have used themselves.

This led to some head scratching until Monty had a brainstorm: “Let’s go talk to Nick the Druid!”

Relief at not having to figure this puzzle out themselves led to an immediate agreement and the party fled once more from the mansion, back to the Inn, got directions to Nick’s house and away they went to the edge of the swamp.  In a clearing, in a nice area, they found a small cabin, cozy looking, with a swirl of smoke from the chimney.

The knocked, and Nick appeared and let them in.  As soon as he saw the black medallion he became interested and concerned, his concern and interest doubling at the news of the arms stored in the caverns. “We – the Druids – have seen some of this type of thing at various points near the Nazar border,” he informed the group. “Go figure out the code to that puzzle you got, and get the ringleaders to this plan.  I have to go talk to my superiors.”

When the party looked to Nick to puzzle out the puzzle, he snapped, “What am I, a deus ex machina device for the DM? Go figure it out yourselves, you nitwits!”

The party, chastened, squabbling and grumbling, trudged back to Saltmarsh where they ran into Tim the Shipmaster.  He and Nathan the Mayor met the party back at the Inn.  Tim took one look at the document and announced that it was a code, showing when the next delivery would be made.  A series of marks on the page was confounding everyone until an 8-year old wandered by and declared: “That’s Morse code!”

The puzzle seemingly having been puzzled, the party planned to find a way to get the ship making the deliveries the next week to not believe anything amiss so that the party could find a way to board the delivery vessel and create some mayhem.

Conversations ensued, during which the fat Mayor Nathan announced that there was a 25% tariff on all goods, money, and magic found at which point Monty the skinflint mage punched him in the nose.

So much for the tariff.

Monty’s image amongst the townsfolk brightened considerably following that event.

Tim and the party worked out terms by which the party would hire out Tim’s two eldest boys to work the boat they needed to sneak up on and board the ship out on anchor to make deliveries … so long as the proper signals were provided by the lantern in the cavern.

A week of planning followed after which the party successfully conned the delivery ship as it arrived at about 2 am Wednesday the following week.  Tim’s sons were as good as he promised and managed to get the party behind the boat.

The thief went first, got on board without discovery and found that there were two sailors looking landward.  Being somewhat new to this kind of thing, he tried to backstab one guard and wounded him.  The other attacked and the little gnome thief was about to be skewered by the two sailors who immediately also raised the alarm.  The fighter, in his new magic plate mail, clambered up on deck and guarded the hatch down into the remainder of the boat so that the reinforcements could not arrive.

The battle was joined! The pirates were eventually slain, but so was the fighter, even with his new magic armor.  Discovered also on board were two Lizardmen who the party concluded were in league with the pirates.  Hidden in a hold was an aquatic elf prisoner who provided some information about the changes in the sea community over the past year or so, none of which the party could understand how it fit into the facts at their disposal.

Angry at the thief for being stupid, they pitched him overboard a few times while the rest of the party searched the ship.

Money and magic were discovered and claimed, and Tim’s sons sailed the ship into Saltmarsh where it was claimed by the party.

Free to play! All levels of experience welcome! Swing by or call for additional information.